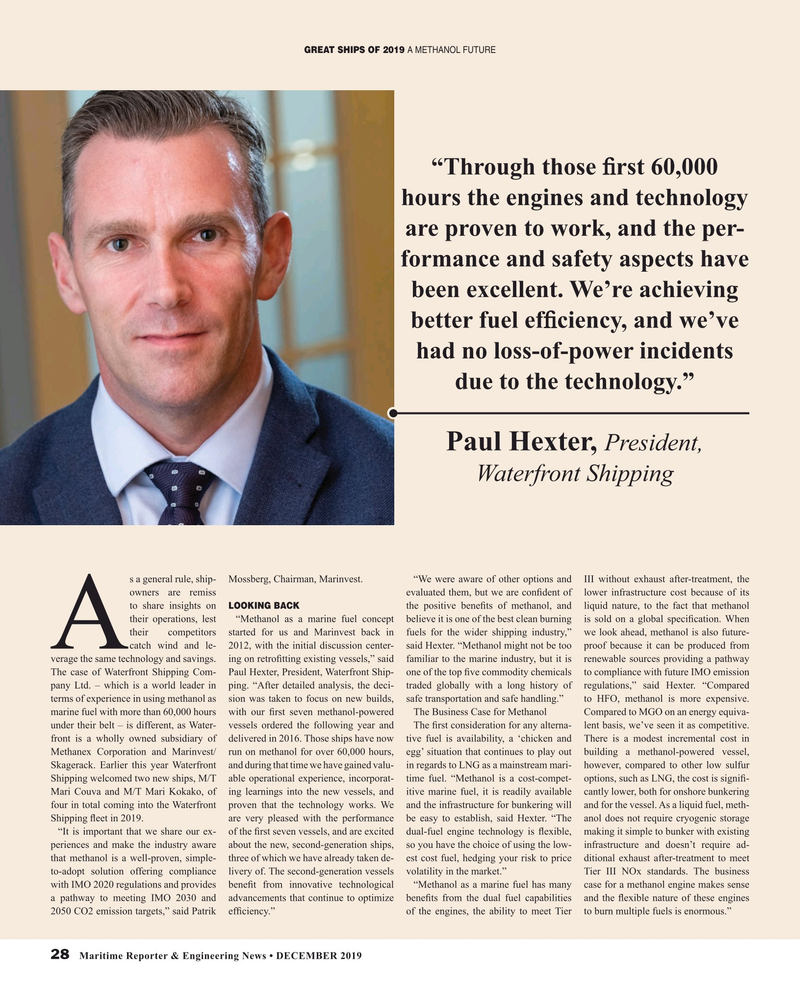 GREAT SHIPS OF 2019 A METHANOL FUTURE “Through those ? rst 60,000 hours the engines and technology are proven to work, and the per- formance and safety aspects have been excellent. We’re achieving better fuel ef? ciency, and we’ve had no loss-of-power incidents due to the technology.”

Waterfront Shipping s a general rule, ship- Mossberg, Chairman, Marinvest. “We were aware of other options and III without exhaust after-treatment, the owners are remiss evaluated them, but we are con? dent of lower infrastructure cost because of its

LOOKING BACK to share insights on the positive bene? ts of methanol, and liquid nature, to the fact that methanol their operations, lest “Methanol as a marine fuel concept believe it is one of the best clean burning is sold on a global speci? cation. When their competitors started for us and Marinvest back in fuels for the wider shipping industry,” we look ahead, methanol is also future-

A catch wind and le- 2012, with the initial discussion center- said Hexter. “Methanol might not be too proof because it can be produced from verage the same technology and savings. ing on retro? tting existing vessels,” said familiar to the marine industry, but it is renewable sources providing a pathway

The case of Waterfront Shipping Com- Paul Hexter, President, Waterfront Ship- one of the top ? ve commodity chemicals to compliance with future IMO emission pany Ltd. – which is a world leader in ping. “After detailed analysis, the deci- traded globally with a long history of regulations,” said Hexter. “Compared terms of experience in using methanol as sion was taken to focus on new builds, safe transportation and safe handling.” to HFO, methanol is more expensive. marine fuel with more than 60,000 hours with our ? rst seven methanol-powered The Business Case for Methanol Compared to MGO on an energy equiva- under their belt – is different, as Water- vessels ordered the following year and The ? rst consideration for any alterna- lent basis, we’ve seen it as competitive. front is a wholly owned subsidiary of delivered in 2016. Those ships have now tive fuel is availability, a ‘chicken and There is a modest incremental cost in

Methanex Corporation and Marinvest/ run on methanol for over 60,000 hours, egg’ situation that continues to play out building a methanol-powered vessel,

Skagerack. Earlier this year Waterfront and during that time we have gained valu- in regards to LNG as a mainstream mari- however, compared to other low sulfur

Mari Couva and M/T Mari Kokako, of ing learnings into the new vessels, and itive marine fuel, it is readily available cantly lower, both for onshore bunkering four in total coming into the Waterfront proven that the technology works. We and the infrastructure for bunkering will and for the vessel. As a liquid fuel, meth-

Shipping ? eet in 2019. are very pleased with the performance be easy to establish, said Hexter. “The anol does not require cryogenic storage “It is important that we share our ex- of the ? rst seven vessels, and are excited dual-fuel engine technology is ? exible, making it simple to bunker with existing periences and make the industry aware about the new, second-generation ships, so you have the choice of using the low- infrastructure and doesn’t require ad- that methanol is a well-proven, simple- three of which we have already taken de- est cost fuel, hedging your risk to price ditional exhaust after-treatment to meet to-adopt solution offering compliance livery of. The second-generation vessels volatility in the market.” Tier III NOx standards. The business with IMO 2020 regulations and provides bene? t from innovative technological “Methanol as a marine fuel has many case for a methanol engine makes sense a pathway to meeting IMO 2030 and advancements that continue to optimize bene? ts from the dual fuel capabilities and the ? exible nature of these engines 2050 CO2 emission targets,” said Patrik ef? ciency.” of the engines, the ability to meet Tier to burn multiple fuels is enormous.” 28 Maritime Reporter & Engineering News • DECEMBER 2019