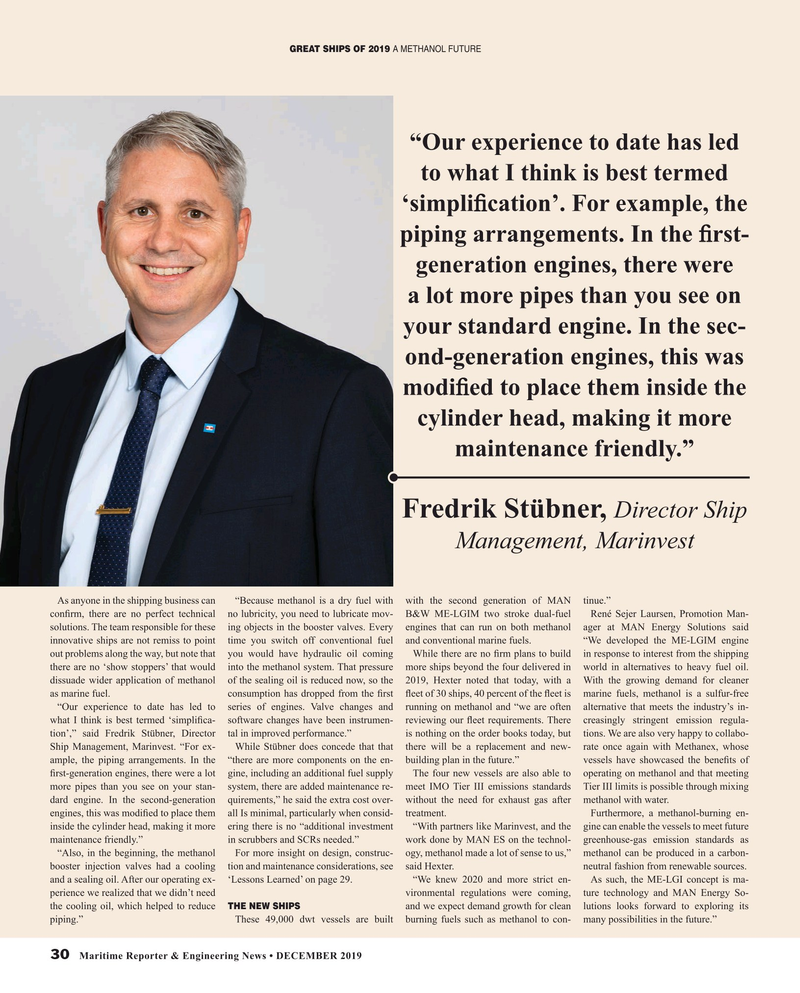 GREAT SHIPS OF 2019 A METHANOL FUTURE “Our experience to date has led to what I think is best termed ‘simpli? cation’. For example, the piping arrangements. In the ? rst- generation engines, there were a lot more pipes than you see on your standard engine. In the sec- ond-generation engines, this was modi? ed to place them inside the cylinder head, making it more maintenance friendly.”

As anyone in the shipping business can “Because methanol is a dry fuel with with the second generation of MAN tinue.” con? rm, there are no perfect technical no lubricity, you need to lubricate mov- B&W ME-LGIM two stroke dual-fuel René Sejer Laursen, Promotion Man- solutions. The team responsible for these ing objects in the booster valves. Every engines that can run on both methanol ager at MAN Energy Solutions said innovative ships are not remiss to point time you switch off conventional fuel and conventional marine fuels. “We developed the ME-LGIM engine out problems along the way, but note that you would have hydraulic oil coming While there are no ? rm plans to build in response to interest from the shipping there are no ‘show stoppers’ that would into the methanol system. That pressure more ships beyond the four delivered in world in alternatives to heavy fuel oil. dissuade wider application of methanol of the sealing oil is reduced now, so the 2019, Hexter noted that today, with a With the growing demand for cleaner as marine fuel. consumption has dropped from the ? rst ? eet of 30 ships, 40 percent of the ? eet is marine fuels, methanol is a sulfur-free “Our experience to date has led to series of engines. Valve changes and running on methanol and “we are often alternative that meets the industry’s in- what I think is best termed ‘simpli? ca- software changes have been instrumen- reviewing our ? eet requirements. There creasingly stringent emission regula- tion’,” said Fredrik Stübner, Director tal in improved performance.” is nothing on the order books today, but tions. We are also very happy to collabo-

Ship Management, Marinvest. “For ex- While Stübner does concede that that there will be a replacement and new- rate once again with Methanex, whose ample, the piping arrangements. In the “there are more components on the en- building plan in the future.” vessels have showcased the bene? ts of ? rst-generation engines, there were a lot gine, including an additional fuel supply The four new vessels are also able to operating on methanol and that meeting more pipes than you see on your stan- system, there are added maintenance re- meet IMO Tier III emissions standards Tier III limits is possible through mixing dard engine. In the second-generation quirements,” he said the extra cost over- without the need for exhaust gas after methanol with water. engines, this was modi? ed to place them all Is minimal, particularly when consid- treatment. Furthermore, a methanol-burning en- inside the cylinder head, making it more ering there is no “additional investment “With partners like Marinvest, and the gine can enable the vessels to meet future maintenance friendly.” in scrubbers and SCRs needed.” work done by MAN ES on the technol- greenhouse-gas emission standards as “Also, in the beginning, the methanol For more insight on design, construc- ogy, methanol made a lot of sense to us,” methanol can be produced in a carbon- booster injection valves had a cooling tion and maintenance considerations, see said Hexter. neutral fashion from renewable sources. and a sealing oil. After our operating ex- ‘Lessons Learned’ on page 29. “We knew 2020 and more strict en- As such, the ME-LGI concept is ma- perience we realized that we didn’t need vironmental regulations were coming, ture technology and MAN Energy So-

THE NEW SHIPS the cooling oil, which helped to reduce and we expect demand growth for clean lutions looks forward to exploring its piping.” These 49,000 dwt vessels are built burning fuels such as methanol to con- many possibilities in the future.” 30 Maritime Reporter & Engineering News • DECEMBER 2019