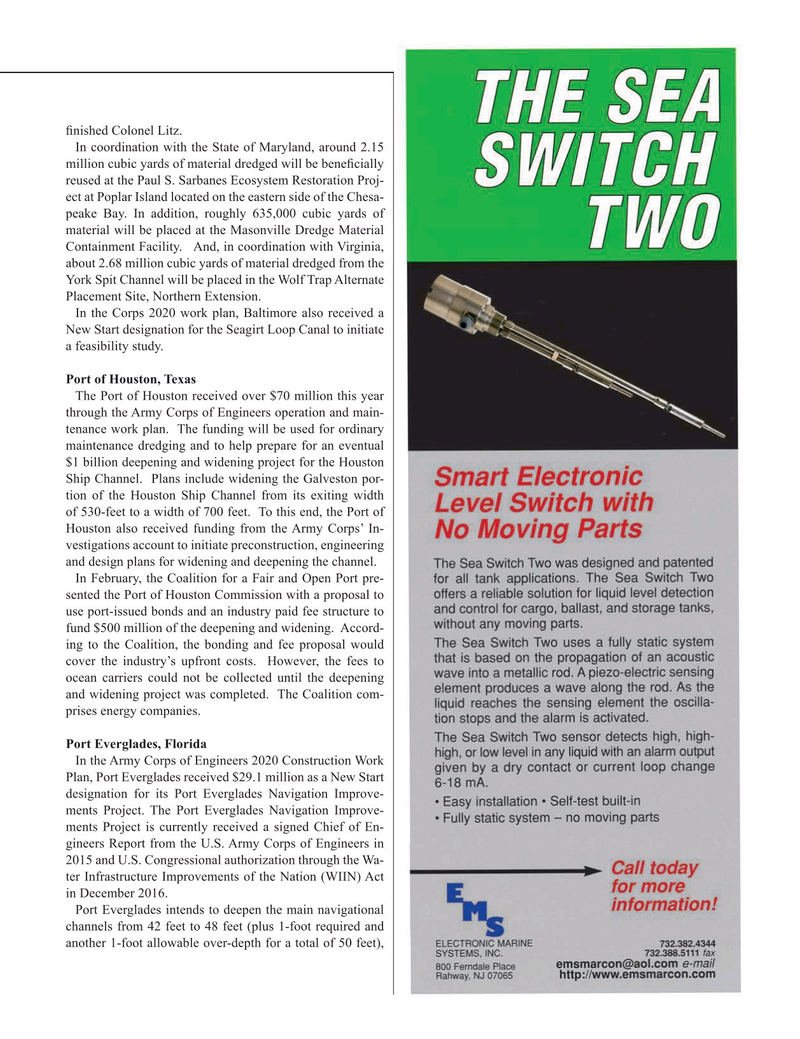 In coordination with the State of Maryland, around 2.15 million cubic yards of material dredged will be bene? cially reused at the Paul S. Sarbanes Ecosystem Restoration Proj- ect at Poplar Island located on the eastern side of the Chesa- peake Bay. In addition, roughly 635,000 cubic yards of material will be placed at the Masonville Dredge Material

Containment Facility. And, in coordination with Virginia, about 2.68 million cubic yards of material dredged from the

York Spit Channel will be placed in the Wolf Trap Alternate

In the Corps 2020 work plan, Baltimore also received a

New Start designation for the Seagirt Loop Canal to initiate a feasibility study.

The Port of Houston received over $70 million this year through the Army Corps of Engineers operation and main- tenance work plan. The funding will be used for ordinary maintenance dredging and to help prepare for an eventual $1 billion deepening and widening project for the Houston

Ship Channel. Plans include widening the Galveston por- tion of the Houston Ship Channel from its exiting width of 530-feet to a width of 700 feet. To this end, the Port of

Houston also received funding from the Army Corps’ In- vestigations account to initiate preconstruction, engineering and design plans for widening and deepening the channel.

In February, the Coalition for a Fair and Open Port pre- sented the Port of Houston Commission with a proposal to use port-issued bonds and an industry paid fee structure to fund $500 million of the deepening and widening. Accord- ing to the Coalition, the bonding and fee proposal would cover the industry’s upfront costs. However, the fees to ocean carriers could not be collected until the deepening and widening project was completed. The Coalition com- prises energy companies.

In the Army Corps of Engineers 2020 Construction Work

Port Everglades intends to deepen the main navigational channels from 42 feet to 48 feet (plus 1-foot required and another 1-foot allowable over-depth for a total of 50 feet),