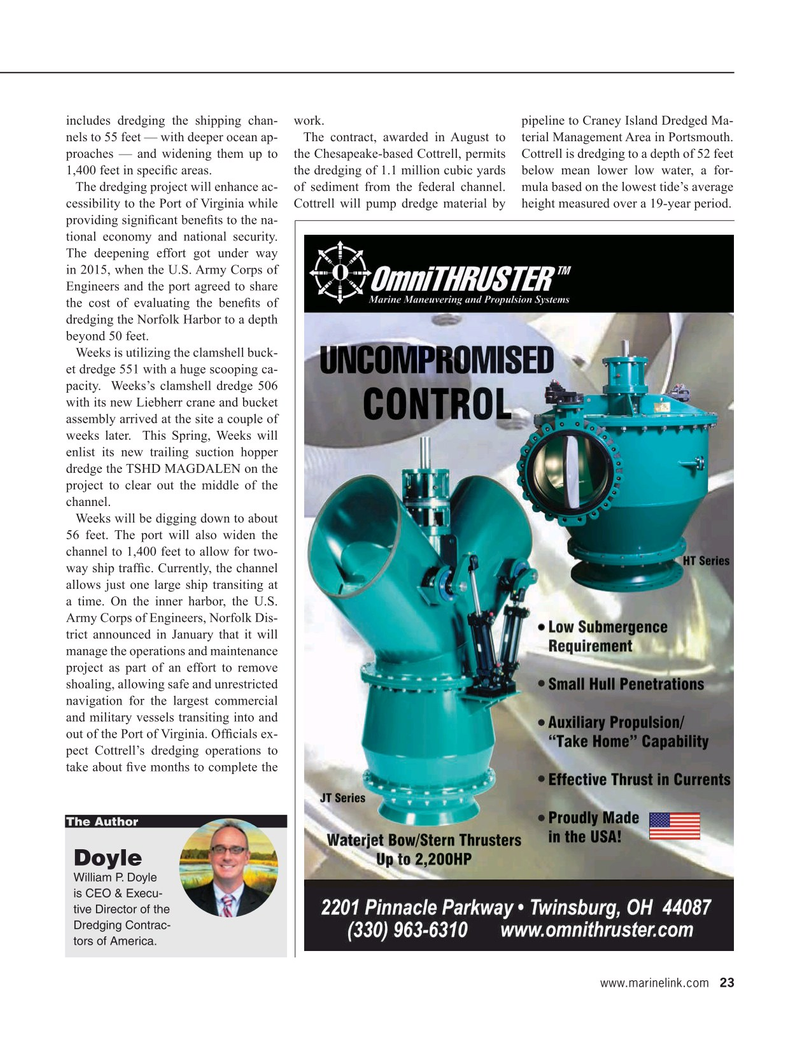 includes dredging the shipping chan- work. pipeline to Craney Island Dredged Ma- nels to 55 feet — with deeper ocean ap- The contract, awarded in August to terial Management Area in Portsmouth. proaches — and widening them up to the Chesapeake-based Cottrell, permits Cottrell is dredging to a depth of 52 feet 1,400 feet in speci? c areas. the dredging of 1.1 million cubic yards below mean lower low water, a for-

The dredging project will enhance ac- of sediment from the federal channel. mula based on the lowest tide’s average cessibility to the Port of Virginia while Cottrell will pump dredge material by height measured over a 19-year period.

The deepening effort got under way in 2015, when the U.S. Army Corps of

Engineers and the port agreed to share the cost of evaluating the bene? ts of dredging the Norfolk Harbor to a depth beyond 50 feet.

Weeks is utilizing the clamshell buck- et dredge 551 with a huge scooping ca- pacity. Weeks’s clamshell dredge 506 with its new Liebherr crane and bucket assembly arrived at the site a couple of weeks later. This Spring, Weeks will enlist its new trailing suction hopper dredge the TSHD MAGDALEN on the project to clear out the middle of the channel.

Weeks will be digging down to about 56 feet. The port will also widen the channel to 1,400 feet to allow for two- way ship traf? c. Currently, the channel allows just one large ship transiting at a time. On the inner harbor, the U.S.

Army Corps of Engineers, Norfolk Dis- trict announced in January that it will manage the operations and maintenance project as part of an effort to remove shoaling, allowing safe and unrestricted navigation for the largest commercial and military vessels transiting into and out of the Port of Virginia. Of? cials ex- pect Cottrell’s dredging operations to take about ? ve months to complete the

William P. Doyle is CEO & Execu- tive Director of the