The United States domestic maritime sector recently celebrated the 100th anniversary of the passage by Congress of the Jones Act. It is considered the most significant of various US cabotage laws. Few mariners though appreciate the long history of cabotage laws in this country.

Cabotage laws here are older than our nation. The British Navigation Acts and its predecessors were designed to develop, promote, and regulate British ships, shipping, trade, and commerce between other countries and with its colonies, including the restriction of foreign participation in its colonial trade. Later the goal of generating revenues from the colonies was added as a purpose of the Navigation Acts. This was done by prohibiting the colonies from exporting certain products to foreign nations and requiring the purchase of other products from Britain or British colonies. For example, molasses and later sugar could only be legally imported into the North American colonies from the British West Indies, even though these products could be purchased at a much lower price in the French West Indies. Such actions created dissention in the North American colonies, as well as increased smuggling, and were factors that led to the American Revolution.

In 1804, subsequent to the ratification of the Louisiana Purchase, foreign vessels coming up the Mississippi River were required to unlade in New Orleans. This effectively stopped all foreign vessels from operation on the Western Rivers upstream. In 1812, as an exception to prior law, steamboats owned wholly or in part by aliens resident in the United States were allowed to be enrolled and licensed, so long as they operated only in US bays and rivers and a bond of $1,000 was paid by the owner or owners. When the War of 1812 broke out, the duty on imported goods and merchandise was raised to 100%, with an addition 10% duty on goods and merchandise imported on foreign vessels. Also, the duty on foreign vessels calling in US ports was raised.

In 1813 a law was adopted, to enter into effect when war with the United Kingdom ended, making it unlawful to employ on any vessel of the United States persons other than citizens of the United States or persons of color or natives resident in the United States, except that masters in foreign ports were authorized to hire foreign seamen if there was a deficiency of US seamen in that port. This law, amended many times, remains in effect to date.

Commencing in 1817, the officers and at least three-fourths of the crews of vessels engaged in the fisheries were required to be citizens of the United States. The law also imposed a duty of fifty cents per ton for vessels of the United States, except for licensed vessels, engaged in transporting goods, wares, or merchandise from one state to a non-adjacent state. In 1819, the coasting trade law was amended to establish two ‘great districts’ – one on the east coast (and waters pertaining thereto) and the other on the south coast (and waters pertaining thereto). Vessels licensed for the coasting trade were allowed to so trade within their particular ‘great district’. Vessels could be separately licensed to trade between the ‘great districts’.

In 1825, enrollments and licenses for steamboats owned by incorporated companies was allowed for the first time. The enrollment or license was to be issued in the name of the president or secretary of the incorporated company. The president or secretary was required to swear or affirm that no part of the steamboat had been or was then owned by any foreigners.

In 1830, tonnage duties were abolished as regards vessels of the United States and vessels of foreign nations that likewise exempted US vessels. This remains the current US practice.

In 1848, yachts used exclusively for pleasure purposes were authorized to be enrolled as American vessels and could operate between ports of the United States without making entry.

In 1886, foreign vessels transporting passengers from one US port to another became subject to a fine of $2 per passenger so landed. In 1898, this act was amended to increase the fine to $200 per passenger. The 1898 statute also explicitly prohibited foreign vessels from transporting merchandise laden in one US port to another US port either directly or via a foreign port under penalty of forfeiture.

The Merchant Marine Act, 1920 (popularly known as the Jones Act) was adopted consolidating and updating many of the statutes mentioned above. The Jones Act has been revised numerous times, expanding the cabotage laws to apply to such activities as dredging, salvage, and towing. In 2006, the Act to complete the codification of Title 46, United States Code repealed the uncodified portions of Title 46, including the Jones Act and the other cabotage laws and consolidated them into the United States Code. Judges, maritime lawyers, and members of the maritime community continue to refer to the cabotage laws as the ‘Jones Act’.

In summary, cabotage laws have been part of the fabric of the United States from the beginning. Ironically, the British Navigation Acts, the progenitors of our cabotage laws, were repealed in 1849 under the influence of a free trade philosophy. 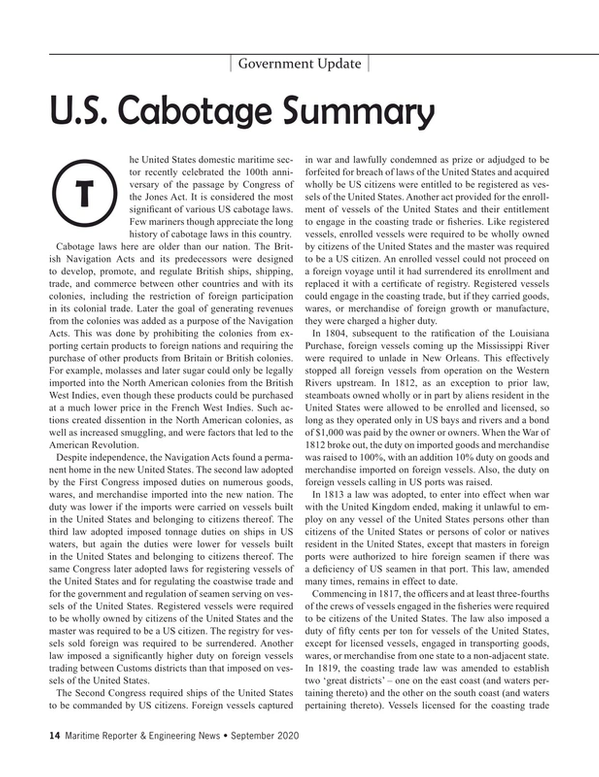 Other stories from September 2020 issue