Reflections on the Trends That Have Shaped the Maritime Industry

This will be my last monthly article for Maritime Reporter & Engineering News. I started writing these articles in early 2002, just over 19 years ago and during that time I have written over 228 articles, missing only one month when my grandson was hospitalized. (I have also written about 6,200 of my (almost) daily newsletters.) Early articles were focused on maritime security, which was still in evolution following the horrific terrorist incidents in New York, Pennsylvania, and Washington, DC. Later, the hot topic was piracy, particularly in waters off Somalia and now shifting o the Gulf of Guinea. For the past year, there have been articles concerning the COVID-19 pandemic and the resulting crew change crisis, which will not be fully resolved until the coronavirus is largely eradicated.

A continuing theme, though, has been environmental protection. Prevention of and response to oil spills is a frequent topic of my articles. The maritime industry, and particularly the tanker sector, have made tremendous strides in preventing accidental discharges. But these days there seems to be zero tolerance for maritime spills so that any discharge draws public attention and government scrutiny. Surprisingly, land-based activities continue to enjoy a lesser standard. 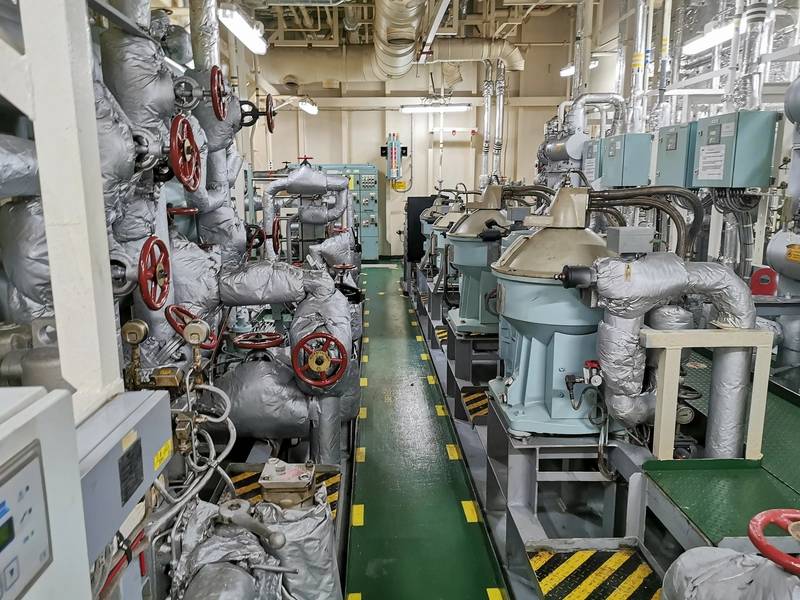 There is one segment of maritime environmental protection that unnecessarily has been a continuing problem. This relates to misuse and abuse of oily water separators and oil record books. Unfortunately, the separators do not work well over the long haul, requiring frequent maintenance and repair. Owners and operators do not provide their chief engineers with the necessary support and funding to keep these units in operation, with the result that many engineers bypass the system and make improper entries in the vessels’ oil record books. Eventually many of these improper entries or inoperable separators are discovered, placing the engineers in difficult legal situations and subjecting owners and operators to potential multi-million-dollar fines. This is avoidable. Owners and operators need to take a round turn on this problem.

Placing cargo in a sealed box has led to an explosion of international trade and a reduction in unit transport costs. Unfortunately, it has also resulted in misdeclaration of cargo, including the non-declaration of dangerous cargo. This has led to a growing number of container shipping casualties and places crew members and response personnel in danger. The industry and the regulators cannot continue to ignore this problem. 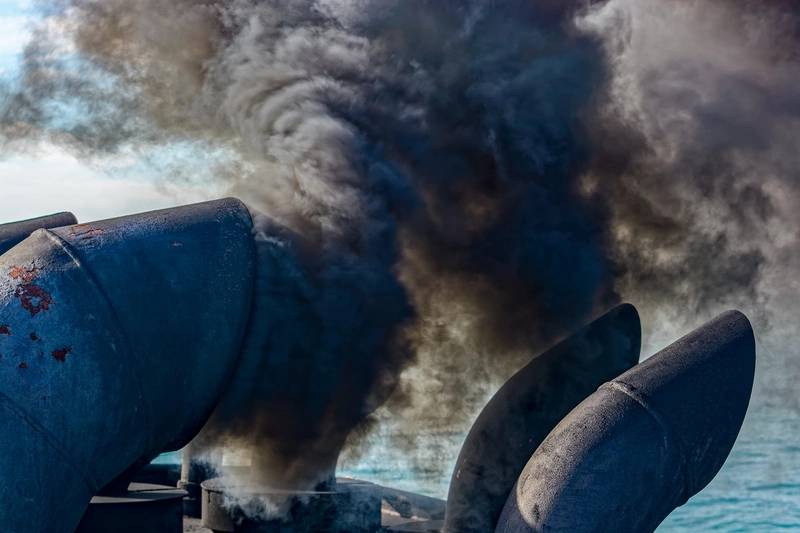 For many years, air emissions from ships were largely ignored. Not that long ago, some ports in Alaska caused a stir when they established visible smoke standards for visiting cruise ships. That was followed by adoption of MARPOL Annex VI to closely regulate SOx and NOx emissions, particularly in emission control areas (ECAs). Now the focus is shifting to greenhouse gas (GHG) emissions, particularly carbon dioxide (CO2). Currently, the emphasis in the shipping sector is on efficiency measurement and goal setting. GHG emission standards, though, are beginning to follow the path laid by SOx and NOx.

One promising approach to reducing harmful air emissions is to power vessels by means other than the traditional diesel engine. Liquefied natural gas (LNG) is the current leading choice as an alternative. It does not emit either SOx or NOx, but it does emit CO2. Efforts to utilize either hydrogen or ammonia are underway, but it will take years to develop the infrastructure needed worldwide by the maritime industry. Research is also underway regarding fuel cells. Some vessels are being built with battery power, but this is largely limited to those that operate in individual ports, such as tugs, or on fixed short routes, such as ferries. Increasing pressure to reduce air emissions will continue, but the concept of zero emissions is a myth. To create energy necessary for propulsion, energy has to be expended somewhere else. Energy creation can be done at a refinery; in an LNG, hydrogen, or ammonia plant; or at an electrical generation facility. Even solar panels and wind turbines require energy (and possibly exotic elements and chemicals) for production. Pollution can be minimized and better controlled, but it cannot be fully eliminated. 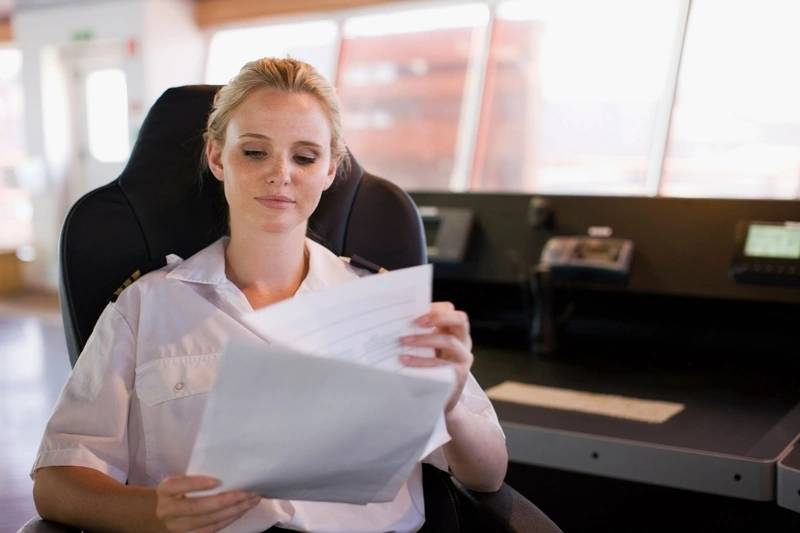 The availability of qualified males is failing to meet the personnel needs of the maritime sector. More women are being attracted to maritime careers. This is an excellent development but will require some cultural adjustment for many men. Get over it! Women are just as capable as men and ask only for proper training and equal opportunity for themselves and attitude adjustment on the part of their male counterparts. 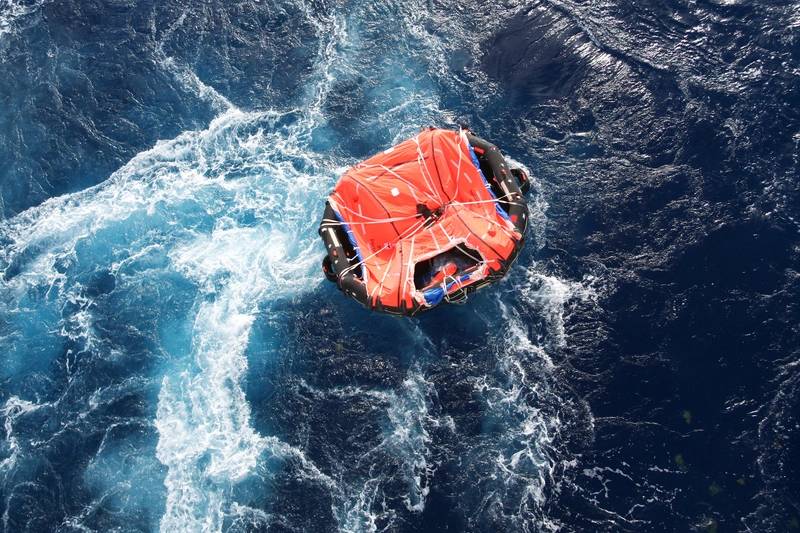 The challenges, though, can be different than they were in the past. Increased automation has induced new problems. With equipment now performing many routine tasks, boredom has set in. As a result, warning signs are overlooked and accidents occur. The sea demands constant vigilance. 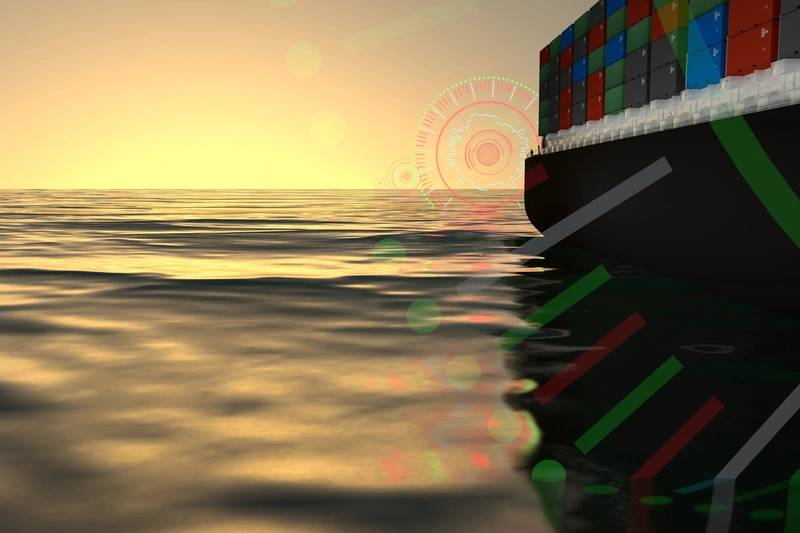 Radar is an early example of the application of technology to the marine sector. It significantly improved safety, but occasionally led to radar-assisted collisions. The electronic chart display and information system (ECDIS) has been a further major advance in marine safety, but there is no universal standard for its manufacture and operation. With different models being installed on different ships, it is a constant challenge to keep deck officers trained in the proper use of the ECDIS model onboard the ship on which they are currently employed. Required training is sorely lacking. As a result, many ECDIS models on many ships are not being used properly. The problem has gotten worse. Some deck officers look at the screen without fully understanding what it displays – and what it could display if properly utilized. A few years ago a bulker grounded at full sea speed on a small, charted island in the South Atlantic in part because the course programmed into the ECDIS was not carefully checked. The officer on watch assumed that everything was fine and because the ship was far at sea, he could cease checking the radar and examining the horizon.

Most of the time though, the officer on watch will catch things in time and avoid the casualty. What will happen when there is no person on the bridge? Autonomous shipping is being actively explored and great advancements have been made. I worry though. Autonomous shipping relies on sophisticated hardware working properly for extended periods in trying and changing environments. It relies on proper software and programming that also operates properly over extended periods. My computer seems to require replacing or a major upgrade every few years. This will be a complex process for a ship. Finally, the system relies on programmers who are conversant in both advanced computer programming and in ship operation. Good luck finding that combination.in future years.

I have enjoyed my long association with the Maritime Reporter and Engineering News. I have especially enjoyed my collaboration with Greg Trauthwein, the sage Editor of this esteemed magazine. He has allowed me broad freedom to select topics that I think might be of interest six weeks in the future and has withheld criticism when my powers of foresight have proven erroneous. One could not ask for more. I have also enjoyed the many comments received from readers of this fine magazine who have taken the time to write me, sometimes to gently nudge me back to reality. I will miss you all! 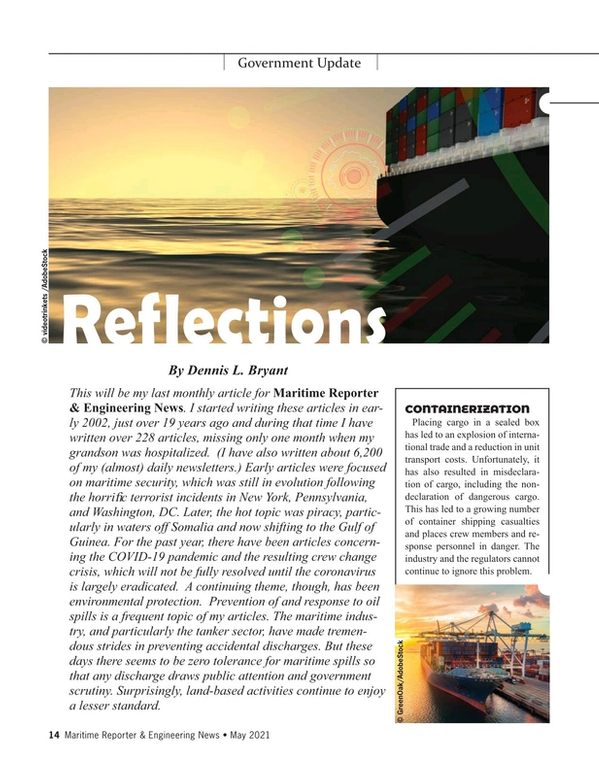 Read Reflections on the Trends That Have Shaped the Maritime Industry in Pdf, Flash or Html5 edition of May 2021 Maritime Reporter

Other stories from May 2021 issue